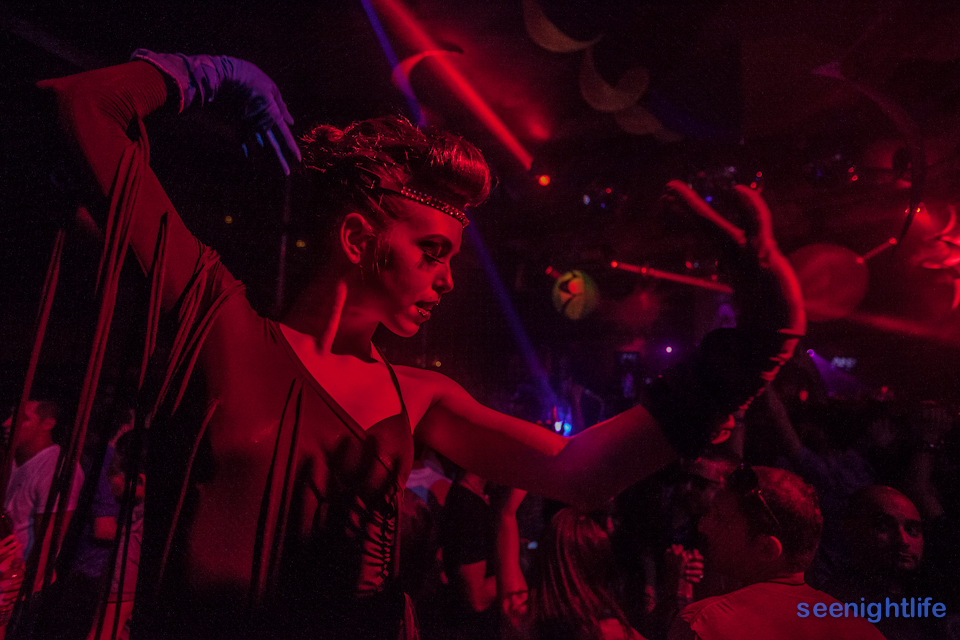 Sometimes you nail it, sometimes you don’t. You’re not always going to score the perfect shot each and every time.

I think a lot of people who pick up a camera get hung up on that. While yes, you try to capture the best image you can at a given moment, sometimes you have to work with what is there.

And sometimes that has to be enough.

Nightlife and concert photography straddles a line between photojournalism and staged photo performance. You can have as much control or as little control as you want in a lot of cases.

Take the image above for example. It is one of the quintessential elements of the modern nightclub, the dancer. Jordyn here is one of the regular girls at Space these days. Through a combination of knowing how my images come out, and being expertly lit by Space’s lighting designers, the image here straddles the line between a “spur of the moment” shot and a staged image. It is a spur-of-the-moment since I usually don’t request specific lighting cues for the dancers at Space. I could, since I maintain a good rapport with Dennis, Gabriel, and Mike, but they have their “canvas” to work their art on and I’d feel like I was interfering if I constantly requested specific lighting cues. Their goal is to light Jordyn in the most flattering way possible, and they succeed, so I leave it at that. When her or any of the other girls get up on the box, I know they will be lit well. So, it is staged, yes, but staged without the interference of me coordinating the lighting.

Now, on occasion, I will ask for specifics from the techs, of course. If I’m assigned to capture a specific image of a performer or DJ, then we will plan ahead. Staging the image gets me paid, and makes for a happy client. However, it’s certainly not photojournalism. 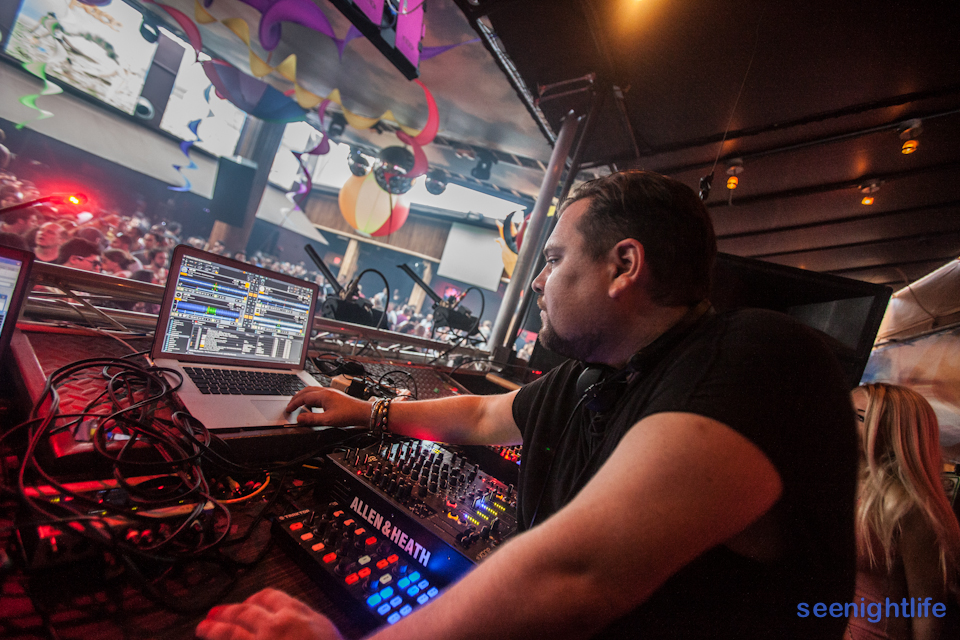 My preference is to work with what is there, usually. I like to document the scene as it is. For example, the image of Reboot (Frank) above. What you see is what was actually happening. Frank was lining up his tracks for the next mix as the sun was rising over the Terrace at Space. No fancy lighting tricks, as a matter of fact, Gabriel had left to go to the bathroom and the lighting console was temporarily unmanned. Aesthetically, the image comes together, even though there may be some technical failings. Some may argue there’s a little too much noise in the image, or that the red light is a little too blotchy. However, the image was captured of one of the headliners of the morning doing his work on the decks, and the compelling nature comes from the overall composition of the image, with Frank being dominant, and the panopoly of gear adding to the atmosphere of the image, and of course, the teeming masses of people on the dancefloor below. A viewer would want to know more about what happened there, regardless of the noise or slight color issues. I documented what was there within the limits of my equipment, and I’d like to think I pulled it off. I didn’t use a flash to blow out the scene, nor did I call on one of the techs to light the booth just for me, even though I will do that on occasion. However, that wasn’t one of those occasions.

I worked with what I had on hand, and that was enough. At the end of the day, this presents the most accurate image of what a photographer sees. In an age of extensive photoshop work and manipulation, it’s the least any of us can do. Everyone has their own ideas and tastes about what to do in a club or concert situation, it just so happens mine is to work with what I have, and take it from there. Anything else, in my mind, is distorting reality, and I’d like to think I’m here to document reality through my vision. And sometimes the reality is that the situation is staged, and sometimes it isn’t. I think I’m safe in an ethical sense, since I’m documenting a staged situation, which usually isn’t staged for my benefit. They are pointing high-powered LED fixtures at Jordyn for the benefit of the audience, not myself. I just take advantage of the situation and fire away. While with Frank, he is not specifically lit to an ideal, but what I had to work with there was enough, as it had to be.

Work with what is there, and sometimes it has to be enough.