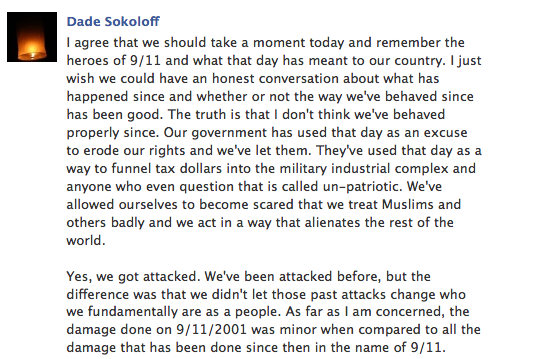 Today is the 11th Anniversary of the September 11th attacks on New York City. The social media sphere is filled with the obligatory graphics and memes of eagles, the WTC towers, and our soldiers deployed in Afghanistan. However, it was the above statement by my friend Dade which made the most sense thus far.

Don’t get me wrong, the actual attack on New York on that fateful Tuesday morning was, in and of itself, a disaster. Over 3000 people died in what was the most brutal attack on American soil since the founding of the country.

However, as Dade said, the real disaster is in how it has been handled since then.

9/11 has become the crutch of American society. Where once we would keep moving forward in the face of adversity, we now cower behind closed doors, and beg our elected officials to do something, anything, to rid the world of the supposed terrorist menace, regardless of the implications to our liberties and our freedoms.

Have we become that timid and complacent that we will give up our essential freedoms and liberties just in the name of the illusion of safety? I say illusion since if someone wants to attack us on our own soil, they will, regardless of the safeguards put into place. I think, at the end of the day, what America can’t cope with is the sobering realization that the world is rather ambivalent to our lifestyle and values. The bulk of the world doesn’t have the time or the energy to waste on hating us. Sure, a few neckbeards in the Middle East might march around in circles screaming “Death to the Great Satan” (that’s us, by the way!), but they don’t represent the majority opinion. The people in the Middle East, in general, are too busy with their daily activities to waste much energy screaming about us. They have families, jobs, and lives, just like we do.

Same for the rest of the world. No one cares. They just want what’s best for them, and what’s best for them doesn’t involve chanting overused slogans in town squares and burning American flags. Newsflash, most of those actions are staged and cleverly edited to overexpose the threat, making it easier for our government to pass senseless legislation like the PATRIOT Act, and the various regulations that enable agencies like the TSA to exist.

But, as long as the government appears to be doing something about the problem (if there even is a problem), the people are timid and complacent. As long as American Idol continues to broadcast, and people can continue to measure their self-worth in Facebook Likes and Klout scores, the people are cowed into submission, and they don’t even know it. It’s a modern day equivalent of bread and circuses. There’s an enemy we can all get riled up about (the supposed beard with the AK-47), and we have our circuses in the form of social networks and mindless reality shows. Sure, such things existed before September 11, 2001, but it wasn’t nearly as execrable as it was after the attacks. Even Pearl Harbor, which led to an actual global conflict, didn’t precipitate the wholesale revocation of civil liberties, and the weakening of our resolve. If anything, Pearl Harbor served as a catalyst for us to defend those freedoms. Maybe terming those people “The Greatest Generation” isn’t such a´clichéd term after all. I can only wonder what future historians will term our generation.

They’ll have to make sure it’s 140 characters or shorter so it fits in a tweet, I can tell you that much.