One of the many things I do to put food on the table is help my good friend Ryan maintain and develop Venue Driver. In a nutshell, Venue Driver is a web application which nightclubs, bars, and lounges use to manage and track their guestlists, VIP table reservations, and ticket sales. It gets a little deeper than that, but for the purposes of this little tale, it will do.

My “role” as it were is sort of a mix of tester, documentation guy, and on-call firefighter. A lot of Venue Driver’s original clients have my direct phone number (something I’m usually loath to give out), but since they are usually people I know, it’s OK.

So, anyways, last night, MySQL went away. MySQL is the engine which drives the Venue Driver database. And when Venue Driver cannot connect to the database, the system throws the error message “MySQL went away”. This happened late last night. And, since it’s a web application used by nightclubs, people definitely noticed, since it is the database that contains a few important things, like customer records, the login info for users, etc.

Thankfully it was a transient experience, MySQL went away for about 90 seconds. It happens. However, a few people noticed, of course. Then my phone blew up.

I was on my evening run, but thankfully I had my pocket mobile computer, and a suite of apps with which to diagnose and troubleshoot. The problem was a non-issue in the end, but I was able to see all system statistics and parameters, in real time, on the corner of 90th and Biscayne Boulevard, on foot. I’m working my way to being totally mobilized, without having to have a suite of electronics strapped to my back, or in my car.

Now, since I’m feeling the agalmic cowboy spirit, I’ll clue you all into my little suite of apps. Not just for remote access and system trouble shooting, but for other things like photography and video work.

Note that this is from the perspective of an iPhone/iOS user on a stock, non-jailbroken device. Your perspective might vary. But, this article should be a good starting point.

The first essential tool is a proper browser. For the most part, mobile Safari does the job. However, there are a lot of websites, Venue Driver included, where certain functionality (especially administrative functions), is not available from the “mobile UI” that certain sites adopt when they detect a mobile browser. So, with that in mind, I wholeheartedly recommend the free Mercury Browser. 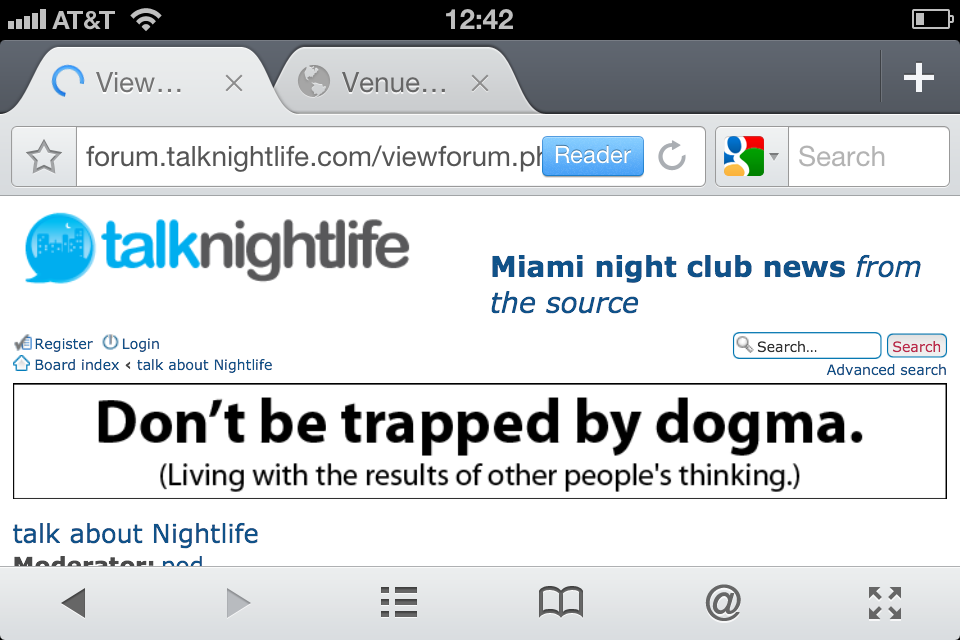 From the get-go, Mercury appears to just be a knock off of the mobile version of Chrome. It has tabbed browsing, sync features, and the usual refinements. Where Mercury excels is that it has a built-in user agent switch function. Basically, this function has Mercury broadcast it’s user agent “tag” as one of any several user-selectable browsers, be it the desktop versions of Chrome, Firefox, Safari, or even Internet Explorer. So, with this, you can view the full versions of any website, with the corollary that you will have to do a lot of pinch-and-zoom work to navigate them, of course. And if needed, you can shift it back into it’s default mobile iOS mode, to view mobile websites as needed. It’s essentially a combo desktop/mobile browser in one convenient package. Where I use this primarily is to access administrative functions of Venue Driver and my other web projects that may not normally be available in a mobile UI.

Another essential tool is a command-line utility. Recently, Talk Nightlife was attacked (well, the server it resided on at Dreamhost was attacked, but let’s pretend it was us!) by script kiddies looking to do PHP injections to launch click fraud campaigns with. This caused everyone’s malware alerts to go off. So, Ryan came up with a small CLI routine which would clean and reset TNL to an uninfected configuration. So, what’s a mobile troubleshooter to do? There’s several options available, the best of which, in my mind is iSSH 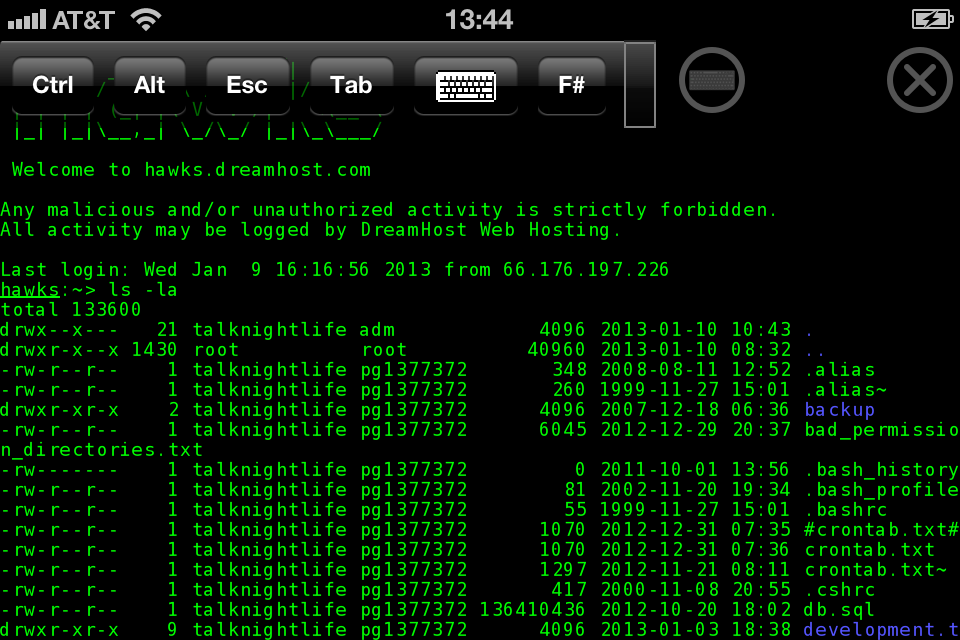 iSSH is the iOS answer to a terminal emulator. Way back in the mists of time, we used terminal emulators to connect our PCs to larger systems on the internet, and perform tasks via the command line of said systems. These days, most of these mundane tasks are handled by automation or web UIs, but on occasion, it is more expeditious, or sometimes in an emergency, is the only way, of getting critical system tasks done. A prime example being the cleaning and restoration of TNL after the attack I mentioned earlier. iSSH supports numerous terminal emulations, most common protocols such as telnet, VNC, ssh (including private/public keys), X, and even RDP. At $10, it’s a bit pricey for an iOS app, but since it’s quite involved and a niche product, it is to be expected. And what’s $10 anyways?

One other great tool for the mobile tech-support warrior to have is a text editor. At it’s root, iOS has a notepad function, but this is strictly limited to just taking notes. In order to edit text files and do quick code adjustments on the go, something a little more robust is needed. Enter Textastic. 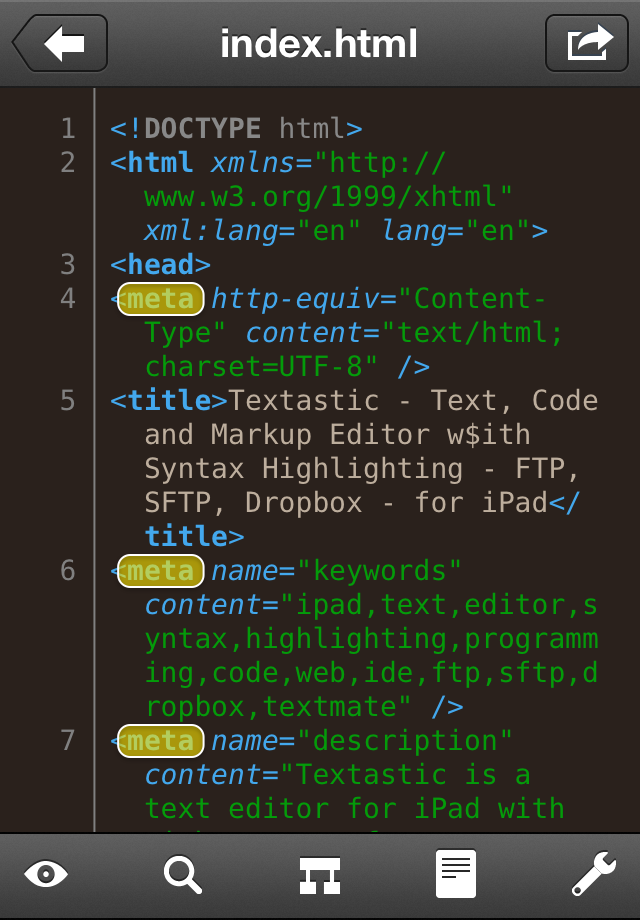 At $9, again, there is a monetary cost attached to this app, but for the versatility and utility, it can’t be beat. You can, with the proper authentication, connect to remote servers and edit the files inline, and Textastic is intelligent enough to recognize what it is you are working on, whether it is a Ruby gem, an HTML document, a bit of PHP code, or even a MySQL database file. Where this comes in handy is that this app will arrange and color code the file for you, allowing for easier manipulation and navigation, a lifesaver on a small screen. As one reviewer put it, “create anywhere, anytime…”. That’s actually kinda nice, I might use that.

Of course, since I also point cameras at things for a living, I do have an interest in mobile photography and video applications. This segment of mobility is very young, owing to the simple fact that image and video manipulation requires a fair bit of processing power and memory usage, in addition to fast connectivity, and also easy local file storage. Of course iOS still lags in that issue, but there are workarounds to that sort of thing. One app that has impressed me thus far is Filterstorm. 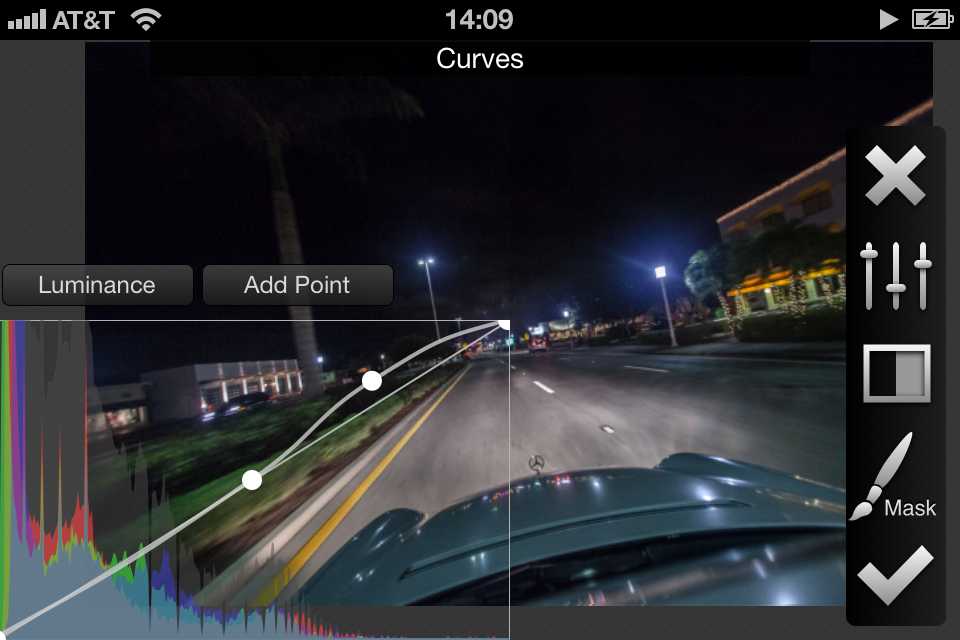 Now on version 4, and with a “pro” version available, Filterstorm works amazingly on both the iPhone and the iPad. Imagine all the basics of Photoshop in a $4 application. That’s Filterstorm. Adjust the levels, curves, and color balance of your images on the fly, as well as add in text, borders, do resizing, and more. Of course, getting material to Filterstorm is a bit of a process (import/download), but once the image is in place, you have a very powerful photo-editing tool in the palm of your hand.

And, what is a good image editor, without a good image acquirer (camera app)? There are numerous camera apps out there, some frivolous, some not. The one I’ve found to be of the most use thus far has been the popular Camera Plus. 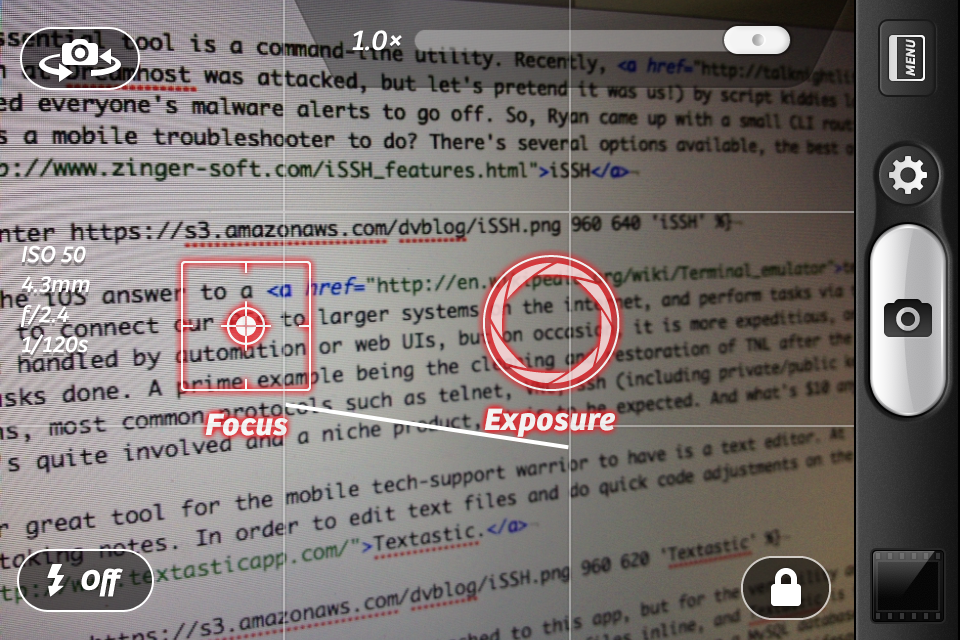 What I find to be the most endearing feature of Camera Plus is the independent manual controls for exposure, white balance, and focus. You can decouple all three functions from each other, in addition to having a whole suite of shooting modes, including burst, timer, and obviously single-shot mode. In addition, the file handling is to be commended, all photos taken, as an option, can be stored in your device’s main Camera Roll, and not within the app itself. I used a prior app, called Camera Awesome, which stored the photos taken within the app itself, leading to a lot of wasted space, considering you had to export the images to utilize them in other applications aside from a few select integrations. Camera Plus does have a small suite of filters and effects, but I do know the intended purpose of the app is for quality mobile image capture, and not macro-scale image manipulation. Macro-scale…

As far as video and audio editing on the go, I’m just beginning to explore this area of mobility, so I will leave my thoughts and opinions on apps within those areas for a future blog post.

Until then, don’t stay still, keep it mobile…

Sidebar: If anyone wants to make similar recommendations for Android, don’t hesitate to do so in the commentary…